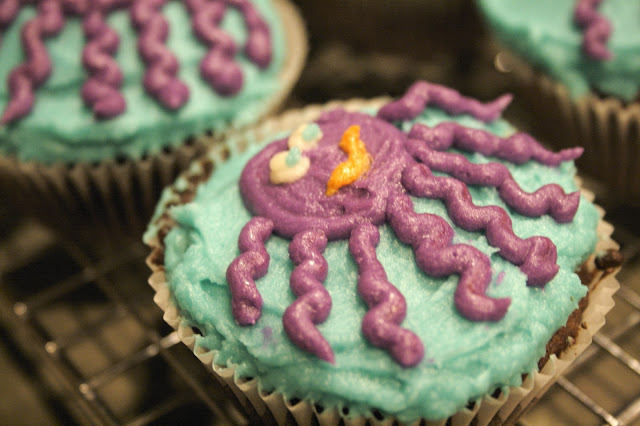 back in september when school started i was getting daily reports of all things new and exciting. in one of these reports a tale was told of a future party that was set up - a journey that started with an alligator and ended with a zebra. to me this was a year long journey and the party anticipation was end of the year round up.

today is the 100th day of school and that is the celebration.

when talk of the party started back in the fall a request for animal shaped cookies was asked for by aydan. it soon evolved into cupcakes and then transformed once again into underwater cupcakes.

now i can make a mean cupcake - my baking business began on the prospect of only cupcakes - but a decorator i am not. i hired someone before specifically for this task. i am not so flush right now. i had to heed this task myself and do it well. why you ask? to impress a class full of 5 year olds?
the answer is simple: of course.

these had to be perfect.

i wanted to make sure that i baked these cupcakes well in advance to ensure that they were cool enough to ice after dinner; so once again i was not up till midnight in a cloud of icing sugar & colour and feeling like my tongue was going to fall off from testing so much to get it just right. i chose a new-to-me recipe as i am always on the quest for the perfect chocolate cupcake and have grown to dislike my current go to recipe as i find there is a slight after taste.

this recipe made 24 of the most perfect cupcakes and i was able to scrape enough off the side of the bowl to make my self a mini tester to see if they were in fact worthy of our little guests of honour. were they ever! moist, fudgy and splendid. right on the money.

that done, the icing was the next hurdle. armed with my classic, old-fashioned sweet buttercream recipe i was off to the races. done and portioned for colouring. now decision time: which colours to use. we went for a blue/teal background, purpley octopuses & starfish and orange goldfish. originally i was going to stick goldfish crackers all over these - which would have actually been quite nice, the contrast between the salty cracker and he sweet icing - but then i took a moment and gave myself a pep talk and embraced the challenge. i could do this. and i did. 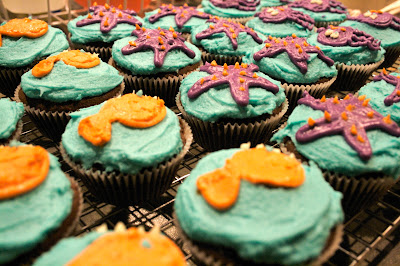 when i finished i called the princess and prince down to get their royal approval. aydan looked over the selection and in hushed tones,  as if she was scared they would all blow away, she said "wow" and "they look great mom." she was happy. i was happy.

this morning she came down at 6:27am and said to me "mommy do you want to know something exciting? today is the 100th day of school." said so calmly and so mature. bless her.
she's excited. i'm excited for her.

i did these for her. today she gets to go to school and feel like a rockstar because the cupcakes that everyone is going to oohh and aahh over were her contribution.
that's why i did it.
that's why i will always do it.
for her. for them. 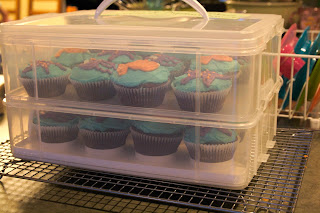 In a medium bowl, whisk together flour, cocoa, baking powder, baking soda, and salt; set aside.

In a large bowl, using an electric mixer, beat butter and sugar until light and fluffy. Add eggs and yolks, one at a time, beating well after each addition; beat in chocolate and vanilla. With mixer on low, alternately add flour mixture in three parts and buttermilk in two, beginning and ending with flour mixture.

Divide batter between prepared pans. Bake until a toothpick inserted in center of a cake comes out clean, 20 minutes. Cool in pans 2 minutes;  place onto a wire rack to cool completely.

in an electric mixer blend butter till all nice and creamy. scrape down sides of bowl. in little bits, start adding icing sugar and blend after each addition. also start adding milk as well. when all incorporated add vanilla extract. keep tasting along the way for desired sweetness and consistency. once perfected tint away to your heart desires!

(going to be making a valentines version this weekend for us!) 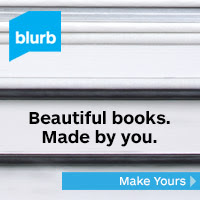